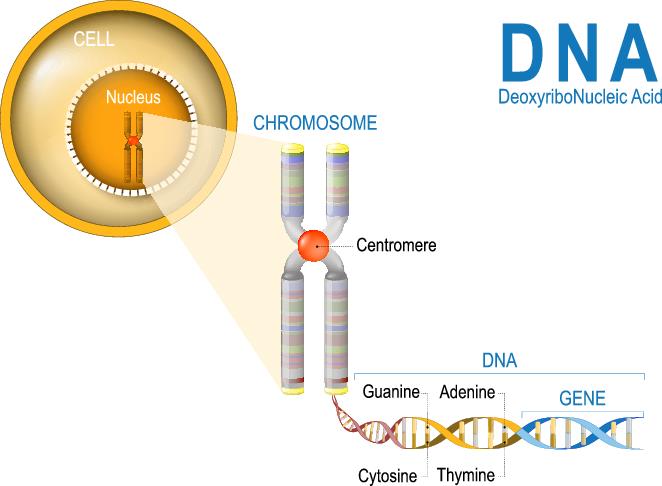 Discoveries are happening at a rapid rate, and the genetic landscape of dystonia is growing increasingly complex. This complexity is revealing fascinating new data about the origins of dystonia and opening up opportunities for further research. The ultimate goal of better understanding dystonia genetics is the development of treatment and prevention methods.

How Many Dystonia Genes?
More than 200 genes have been linked to dystonia. Detrimental changes in some of these genes cause specific types of dystonia such as DYT1/TOR1A, DYT6/THAP1, and DYT11/SGCE. Many of the 200 genes are linked to neurodegenerative and metabolic diseases for which dystonia is often a symptom.

Genes cause dystonia when they contain specific mutations (gene variants) that alter one or more parts of the gene.  A wide variety of genes and mutations contribute to the complexity of hereditary dystonias. In the case of DYT1/TOR1A, nearly all patients have the same mutation in the gene. By contrast, about 100 different mutations have been reported in patients with DYT6/THAP1 dystonia.

Christine Klein, MD heads the University of Luebeck’s Institute of Neurogenetics and is the Principal Investigator of the Institute’s Translational Neurogenetics section. She is a past member of the DMRF Medical & Scientific Advisory Council and much of her research focuses on inherited dystonias. Dr. Klein explains: ““First of all, it can often be difficult to clearly  distinguish between a truly disease-causing mutation and a benign variant that is simply very rare. We all carry a large number of variants in our genes which account for the differences between people and very few, if any, cause disease. Second, many of the recently identified genes were found in small families and represent the ‘most likely candidate’ among several genes that harbor variants and possible mutations. This has led to a situation where some dystonia genes could not be confirmed and it can thus be challenging for neurologists and  geneticists to interpret genetic testing results which may be less clear-cut than one would have hoped for.”

While technology advances are certainly fueling discovery, recruiting volunteers and large families to participate in genetic studies is paramount. Mark LeDoux, MD, PhD is a past member of the DMRF Medical & Scientific Advisory Council and grant recipient. He is Chief of the Division of Movement Disorders and Director of Movement Disorders Research Laboratories at University of Tennessee's Neuroscience Institute: “Although genetic risk factors play an important role in dystonia, less than 10% of affected individuals have an identifiable mutation in one of the known dystonia genes. Therefore, a large percentage of heritability remains largely unknown. Most current genetic research is focused in families with three or more affected individuals since it is very difficult to convincingly tie a particular variant to dystonia in single individuals.”

One Gene, Three Disorders - Rapid-onset dystonia parkinsonism (RDP) is characterized by abrupt onset of dystonic and parkinsonian symptoms with possible psychiatric features. RDP is caused by mutations in DYT12/ATP1A3. Different mutations in this same gene cause two other neurological disorders: alternating hemiplegia of childhood and CAPOS syndrome. Researchers are trying to determine how mutations in the same gene can produce such neurologically distinct disorders. These discoveries demonstrate how complex medical genetics can be.

New Cause for Pediatric Dystonia - A newly discovered dystonia gene, DYT28/KMT2B, may be among the most common causes of childhood onset generalized dystonia. The expression of this gene seems to range from mild dystonia to a complex dystonia syndrome including microcephaly, intellectual disability, developmental delay, seizures, spasticity, and other symptoms. Researchers have just begun to learn more about the gene and clinical signs.

New Cause for Episodic Dystonia - Mutations in ECHS1 are associated with Leigh’s disease, a severe neurological disorder characterized by progressive decline in mental and movement abilities and respiratory failure. However, mutations in ECHS1 have recently been associated with a less severe diagnosis that includes paroxysmal exertion-induced dystonia and appears more responsive to treatment. Genetic testing may help clarify treatment strategy for patients presenting with Leigh syndrome-like symptoms and unexplained paroxysmal exertion-induced dystonia.

Protective Gene - A single mutation in the DYT1/TOR1A gene is responsible for up to 60% of generalized dystonia in non-Jewish populations and 90% in Ashkenazi Jewish communities. However, most people who inherit the mutated gene never develop symptoms. Researchers discovered a gene modifier that may protect from the negative effects of the mutation. Only a fraction of people who have this gene variant develop dystonia, but it is very rare in the general population. This demonstrates that understanding the genetics of dystonia has the potential to identify not only dystonia-causing mutations but also perhaps protective gene modifiers that may help in developing treatment or prevention strategies.

No Gene is an Island: Common Pathways
Now that researchers have identified all these dystonia genes—and undoubtedly there will be more—Dr. LeDoux and others are exploring what the genes have in common. “Each gene and its encoded protein are a piece of the jigsaw puzzle,” he explains. Investigators are working to determine what these proteins do, and to identify biochemical processes in which these proteins may act and cooperate. “Genes causally associated with particular medical disorders tend to function in similar cellular pathways. In this regard, several dystonia genes contribute to cell-cycle control, chromatin structure, and DNA repair pathways in the nucleus of neurons.”

Cell Cycle – Cells have a life cycle with distinct phases. Several dystonia proteins are linked to the early phases in which a cell grows and duplicates its DNA. These proteins may also be involved in packaging DNA in the cell nucleus (in complexes called chromatin) and repairing broken DNA.

Transport & Trafficking – Several dystonia proteins congregate to cell structures involved with moving molecules through cell membranes. These functions link the proteins to molecules that can ultimately cause nervous system malfunction, for example neurotransmitters.

Neuron Signaling – Dystonia occurs due to an imbalance in neurotransmitters and neuron signaling, which upsets the brain pathways responsible for movement. There is ample evidence that dystonia results from an imbalance of dopamine, and several dystonia proteins can be linked to problems in dopamine production.

Next Steps
Geneticists seek to understand how changes in DNA ultimately lead to signs and symptoms of dystonia. This is a critical mechanism to understand because it may uncover opportunities to intervene on the disease process with innovative treatment approaches. Genetics may also explain why certain types of dystonia are more common in specific populations and help identify ways to protect and/or treat populations who may be at risk.

“The more patients contribute their histories and blood samples, the more we can learn,” says Dr. Klein. “We are grateful for the enormous commitment from our patients who generously donate time and biosamples. We hope and work hard to translate our findings into improved or novel therapies, which is the urgently needed next step.”

This article is the second of a two-part series. “Test Taking Tips: Genetic Counselors Inform Patients & Families about Testing for Dystonia” appeared in the Summer 2017 Dystonia Dialogue and is available online at dystonia-foundation.org/archive.

Genetics - The study of genes and their role in controlling living organisms. Medical genetics examines how changes in genetic material cause disease.

Cell - The structural and functional unit of organisms. Cells are “the building blocks of life.”

Protein - Complex molecules required for cell activities and for the structure and function of tissues and organs.

Neurons - Major cell type in the brain and nerves throughout the body.

DNA (Deoxyribonucleic acid) - A complex molecule that contains the genetic instructions an organism needs to live and reproduce. DNA is packaged into chromosomes that contain genes.

Gene – A segment of genetic material responsible for a specific life function.

Genome – The complete genetic make-up (all genes) of an organism.

“There are several different forms of familial dystonia which can be explained by mutations in single genes… These so-called monogenic forms have greatly advanced our understanding of the underlying pathophysiology of dystonia and, at least in some cases, have led to informed genetic counseling or even specific treatments.”
--Christine Klein, MD, University of Luebeck, Institute of Neurogenetics

Does Understanding a Gene Really Matter?
Yes! A genetic subtype of dopa-responsive dystonia (DRD) provides a model for how understanding the dystonia mechanism leads to targeted therapy, and the potential for how therapy can be applied to reduce, or possibly prevent, disabling symptoms.

The treatment of choice for adults and children with DRD is oral levodopa-carbidopa medication, which often dramatically reduces motor symptoms. Clinicians in Germany even reported a remarkable case treating a child with a rare and severe form of DRD during pregnancy. Prenatal levodopa therapy appeared to reduce motor and mental impairments, and continued therapy after the baby was born further controlled the disease.