Each year, the DMRF Canada selects an individual to be represented at the 2016 Chuck’s Run 5 km Walk/Run Event, held at High Park in Toronto. We are pleased to introduce Jesse Arrigo, a very special boy, and an inspiring  Ambassador - who just happens to have a special connection to Chuck Saundercook. 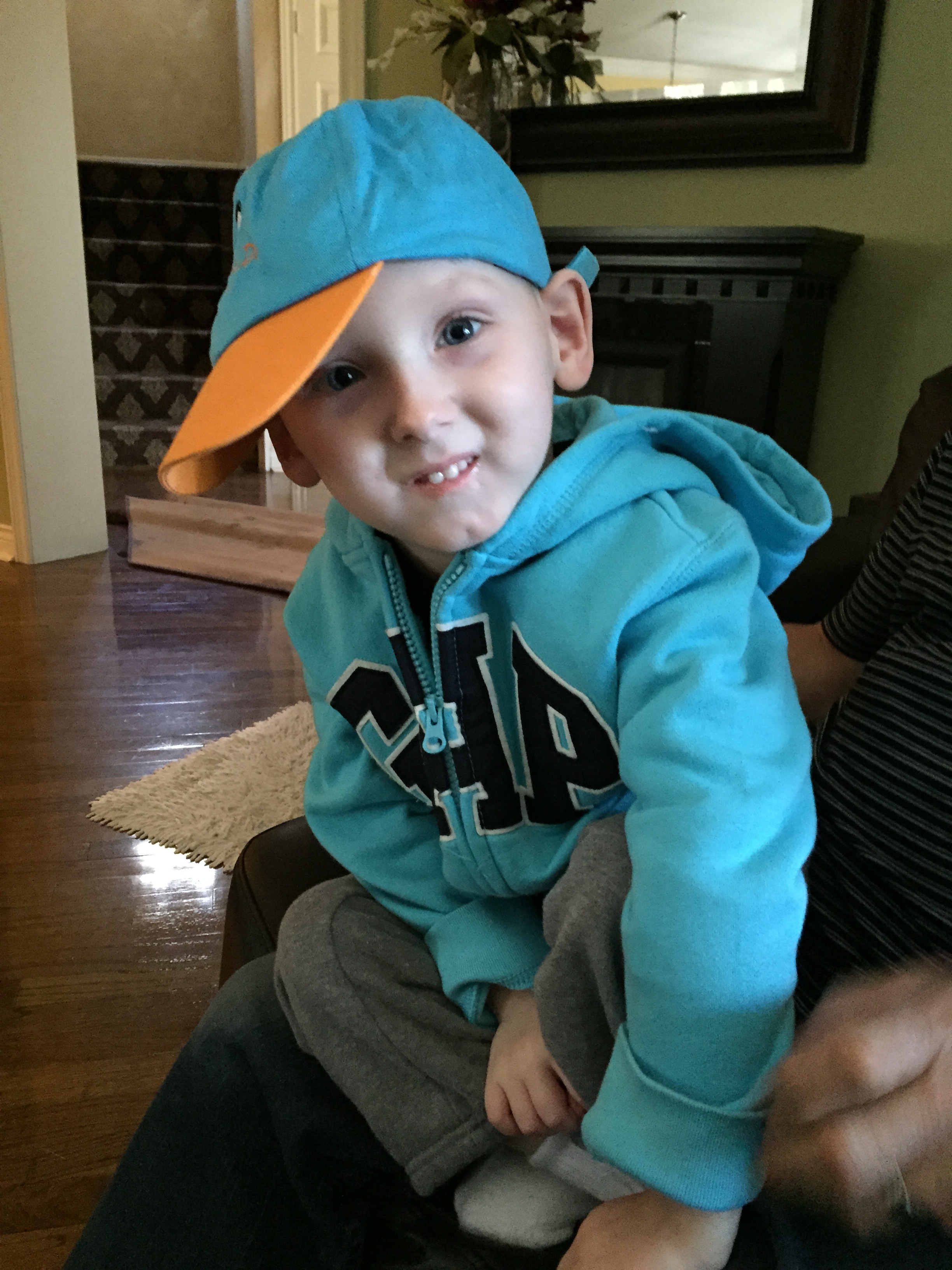 I am writing this story from my perspective as a grandfather.  I currently have three grandsons and the one I write about today is about to turn five years old. His story though has deep roots that seem to dig back through several decades. You see when I was a boy my family lived next door to the Saundercook family. We shared a semi-detached home separated only by a thin centre wall. We lived almost like one big family. An open gate through our back yards and our front doors always open to each other.

The Saundercooks were a family of nine children. One of them was different from the rest.  His name was Chuck.  At an early age Chuck developed a condition called Dystonia.  Back then none of us had heard the term before.  As the years passed we all helplessly watched dystonia take a progressively greater hold on him.  As I approached young adulthood, fell in love and got married, I have a wonderful memory of my new bride and I on each side of Chuck in his wheelchair, him giving us his thumbs up.  It was Chuck's way of giving the big okay to our union. Shortly thereafter - at age sixteen, pneumonia finally took Chuck’s life – due to his weakened state as a result of his dystonia.

As the years passed my wife and I brought three children into the world.  As a young adult our eldest daughter Kristin had a cancer scare and had to have half of her cervix removed.  She wrestled with the fact that chances of her ever conceiving a child of her own were slim to none.  But a day eventually came, much to her surprise and ours that she conceived.  It was like a miracle in the making. Nine months later Kristin bore a son.  She named him Jesse, which means "Gift of God."

Jesse was a very advanced child through all stages of his infancy and due to Kristin's difficult pregnancy Jesse was developmentally tested several times for his physical and cognitive status and he scored at the 97%+ level.  This was a child who shocked us every week with how fast he was learning.  At eight months old after crawling for a couple of weeks, he stood to his feet.  At nine months he walked from couch to table to ottoman, and at ten months he let go of everything that could hold him back and set out to discover the world.

On May 17th, 2011 in a momentary lapse of our attention Jesse discovered the swirling colours beneath the waters of our Koi pond and instantly found himself fighting for his life. Drowning is a silent death.  It isn't an experience full of screaming and shouting for help.  An infant's lungs will fill with water in 30 seconds and silence any call for help.  Even with an adult drowning, arms are not waving in the air as depicted in the movies, they are below the surface pushing down on the water in a futile and desperate attempt to find air above the surface.

Within a moment Kristin pulled Jesse from the water and began CPR on his lifeless body.  Jesse was in full respiratory arrest.  Paramedics arrived and continued CPR for 45 minutes before transporting him to emergency where hospital staff continued CPR and multiple medications for fifty-five minutes.  It would be four more hours and the survival of two cardiac arrests until he would be stable enough to transport him to Toronto's Sick Kids Hospital.  The prognosis was his certain passing before morning.  Jesse miraculously survived the night and has survived every life threat since including double pneumonia.   In our weeks at Sick Kids Hospital we learned that due to Jesse’s anoxic injury (a deprivation of oxygen to the brain) he had developed dystonia; how our minds flashed back to Chuck in those days and in many days since.

A traumatic brain injury such as a blow to the head or an accident can effect a part of the brain, but a non-traumatic anoxic injury is a "blanket" injury that effects the entire brain.  We were told that when millions of brain cells have died and become nothing more than scar tissue there is no known way to restore what was lost.  We grew accustomed to hearing about Jesse's inevitable "constant vegetative state." But due to our faith in God, our great love for Jesse and his undeniable incredible will to live, our family learned to travel way outside the box of traditional therapy for help.  Along the way we have learned that the brain like all other organs and muscles in the human body grows by use.  We have now logged thousands of hours exposing Jesse to visual, auditory and tactile stimulation and many more thousands in dollars to "wake up" dormant brain cells in an effort to rebuild what was lost. 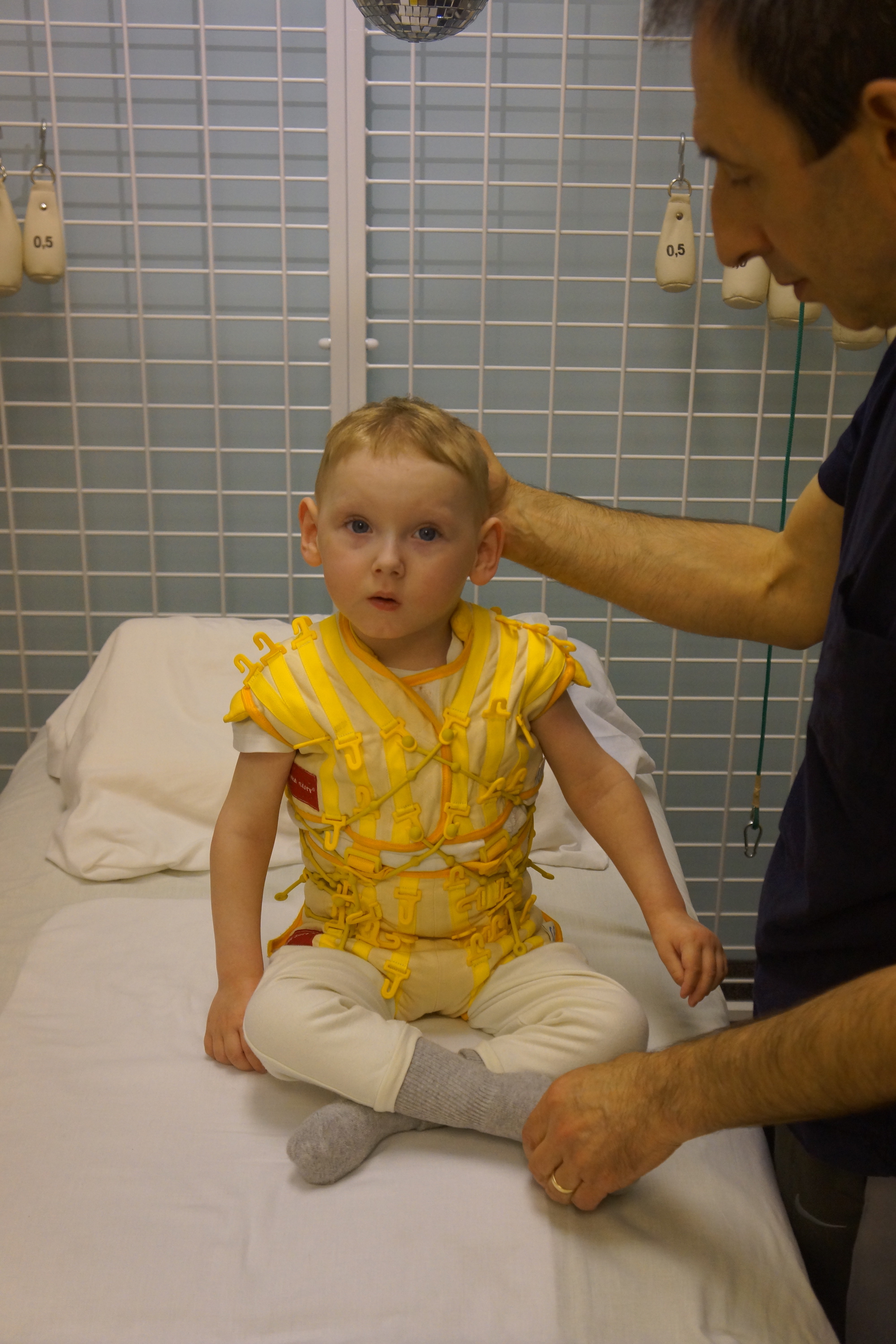 It has been four years since Jesse's accident and his jaw dropping progress has taken many in the medical community by surprise.  He still cannot walk although his is learning to crawl.  He cannot talk, at least in a language that you could understand, but our family is well aware of what he is expressing in the few simple words he has learned and through his own developed communication skills.  And now - three generations later- the Arrigo and Saundercook families have been reunited once again by our mutual love for each other and a common adversary.

Though we feel Jesse's full purpose has yet to be realized, it has fallen now to Jesse, the possibility to contribute one more piece to this puzzle.  Though much has been overcome in his five short years, his biggest challenge remains, and it's called Dystonia.

To learn more about Jesse’s story and how you can help the Arrigo Family please visit: www.jessearrigo.com”